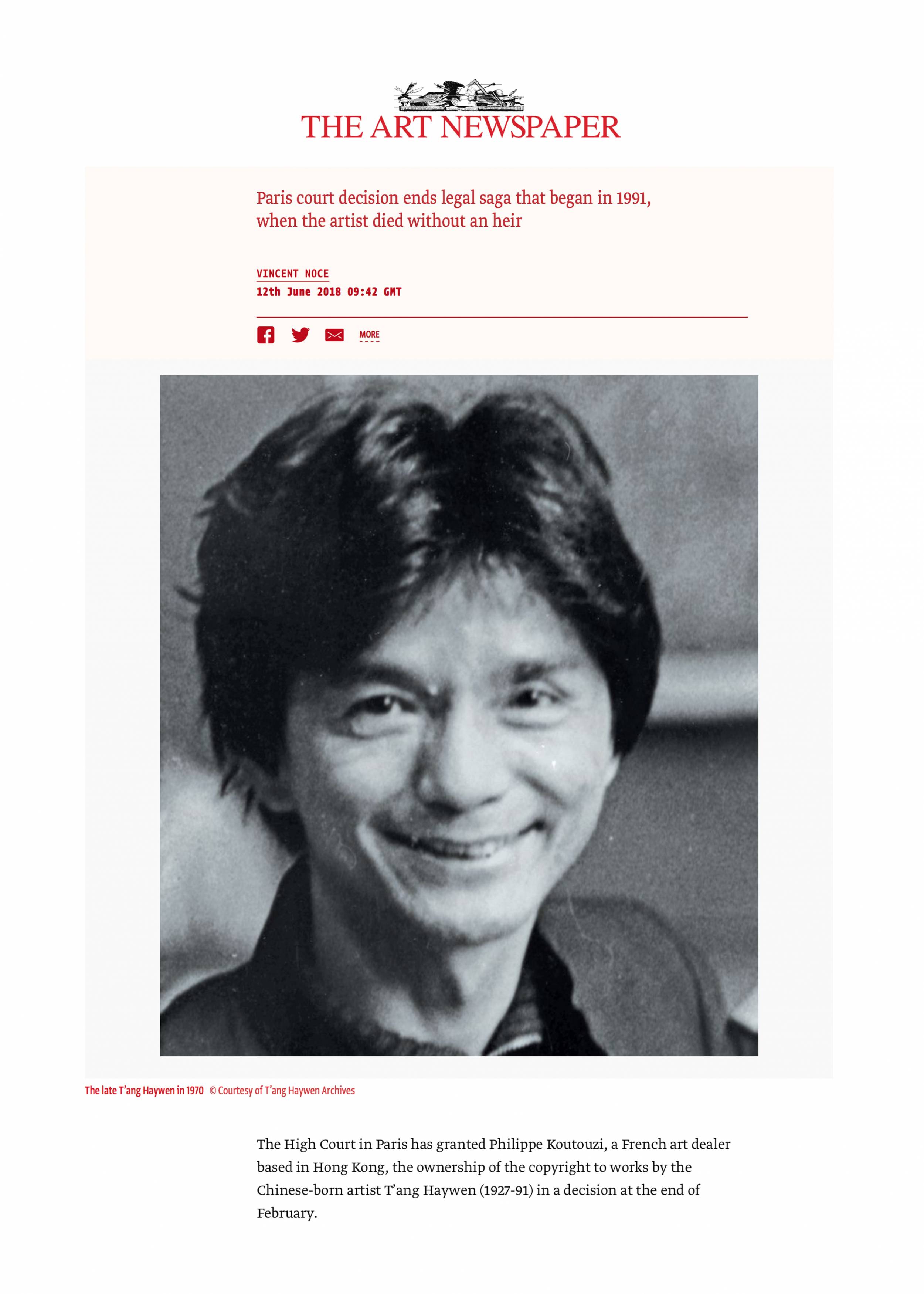 The High Court in Paris has granted Philippe Koutouzi, a French art dealer based in Hong Kong, the ownership of the copyright to works by the Chinese-born artist T’ang Haywen (1927-91) in a decision at the end of February.

Koutouzi, who is also the author of the artist’s catalogue raisonné, has been involved in a series of legal disputes in Europe over works that he has denounced as fakes of T’ang. His fiercest opponent, the Parisian dealer Enrico Navarra, filed a complaint against Koutouzi in France in 2011 accusing him of organised fraud.

The saga started in 1991 following the death of T’ang, who had lived in Paris since 1948. As no heir was found, the French state took charge of his estate. Three years later Koutouzi, tracked down the artist’s brother in China. In 1995, the brother (now deceased) was legally recognised as the sole heir.

Designated as his representative, Koutouzi managed to transfer the assets from the French state to the brother and also bought the copyright to the artist for the symbolic sum of one franc. At the time, he says, T’ang’s works were not valued at all, but Koutouzi wanted the artist’s work to be recognised. Today, the painter’s auction record stands at HK$3.4m ($438,590), achieved at Sotheby’s Hong Kong in 2015 for an untitled abstract work from 1964-66.

Navarra, who wanted to write a monograph on the artist, claimed Koutouzi had fabricated the tale of the artist having a brother in order to steal the rights. But after seven years, a criminal investigation concluded that there was no evidence to support this claim. On 28 February, the decision granting Koutouzi the copyright was confirmed by the High Court, which found there was no evidence “against anyone for having committed the alleged offences, nor any other offence”.

In 2012, Navarra filed another complaint in New York concerning another Chinese artist, Chu Teh-Chun, against Marlborough Gallery and Koutouzi, who used to be the gallery’s director for Asia. It was thrown out of court in 2017.

Koutouzi says he saw the first T’ang forgeries on the market before 2010: “I was surprised to see so many works bearing his signature. I knew he seldom signed his works”. Since then, he has denounced dozens of works on sale in Paris, Brussels and Hong Kong, claiming that his suspicions have been confirmed by technical studies. The fibres of some sheets of paper, for instance, were carbon dated by the Swiss Federal Institute of Technology in Zurich up to 23 years after T’ang’s death. In several cases, the Chinese characters in the signature were wrong, and, Koutouzi says: “There are still hundreds of fakes out there.”

This article appeared in The Art Newspaper, published on 12 June 2018.